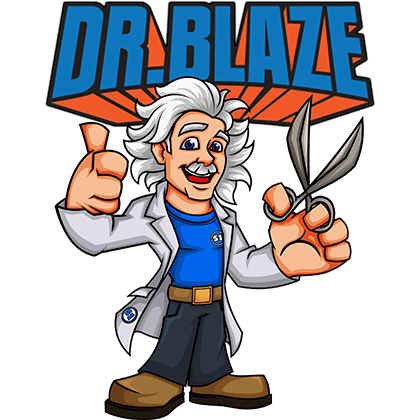 Let’s get to know Dr. Blaze…. By 2009, Dr. Blaze had already been growing the underground heat for a few years. No different from other mom-and-pop shops that opened their grow under the medical laws of SB 420 and prop 215, Dr. Blaze fought long and hard to keep those well-written laws in place while the mainstream wanted cannabis as an income source. Once Rec was the rule of the land, Dr. Blaze and staff adapted and honestly enjoyed the mass populations of seed stock within which they could pheno hunt. It wasn’t surprising to find two thousand to four thousand plant runs constantly being worked, searching for that perfect plant. After being fully observed thru its growth cycle, rigorously tested scientifically and in real life, tortured against bug infestations and other natural elements; then and only then was a genotype selected that had proven itself to be trich - head and pistols above the rest to grow for the community and their growing collective. After many years of heavily seeking those outliers in genetics, and sadly many lost crops to the authorities, Dr. Blaze started to produce his S1 stock. He saw this as the only way to ’“keep” specific cuts around. Dr. Blaze also had acreage at this point and knew that hybrid vigor and ease of use were the way to go on a larger scale. “You don’t see other row crops grown from a clone.” -Dr. Blaze With their first public release since late 2014, Dr. Blaze is here to stay and boasts a living genetic library of over 200 different cultivars. Over the next few months, expect to see more and more personal selections in S1 form hit the market. Free the Seeds !!! The team at Dr. Blaze does not claim to create the strains we offer in S1s. However, Dr. Blaze strongly feels that Mother Nature is the best breeder and that others shouldn’t be laying claim to strains they didn’t make either. Half of the top ten strains in the world are happy mistakes. All pheno hunt runs were purchased directly from the original breeder and sorted through by the Good Dr. If you ever have any situations with our product. Let us know. We will handle it

This is a place to showcase the breeder’s past breeding work. If it is marked retired, it will not come back. However, if it’s marked “out of stock,” Sign up for the “out of stock” list, on the product page, and be the first to know when it comes back in.

Are you 21 or older? You must be of legal age to view our website.
Due to legal requirements you must verify your age.